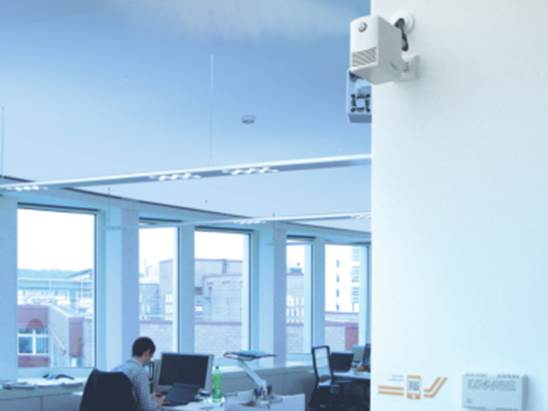 The Fraunhofer Institute for Industrial Engineering IAO examined the importance and effect of air humidity in the office in a 2-year study.  The results show that air humidity has a positive effect on workplace assessment and has also shown to be beneficial to the health and productivity of the office associates.

The tests were done in the centre for virtual engineering ZVE at the Fraunhofer IAO in Stuttgart (picture above) and were further supported with a web-based survey in collaboration with the course study: Facility Management by HTW Berlin.

Three direct room humidification units from the DRAABE NanoFog Evolution series were used for the study, which ensured a constant minimum air humidity of approximately 40 percent relative humidity. The survey of the office users took place over several months, during which the humidifiers were turned on and off periodically. The results of the survey were compared with other building areas where no added humidification was used.

Large differences were noted in responses to the question about air humidity perception during assessments of the different scenarios (Fig. 1): With active air humidification, air humidity was never at any point felt to be too low. If air humidification is not active or not provided at all, more than 40% of the office users assess the air to be too dry and uncomfortable. The average difference between humidified and non-humidified office space was at approximately 16% relative humidity. Increasing air humidity affects office users in a positive way and gives a feeling of greater satisfaction in the work environment. In addition, more than 50% of the respondents assessed the room climate as very refreshing.

Are you interested in the complete set of study results?

Fraunhofer Study in a practical information package, including a free Thermo-hygrometer.

Order now at no charge! 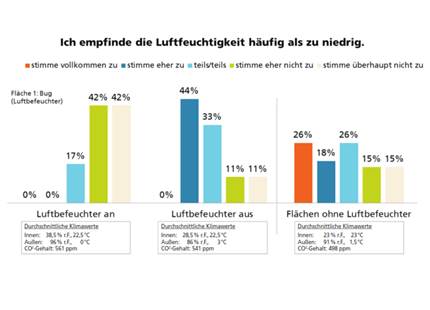 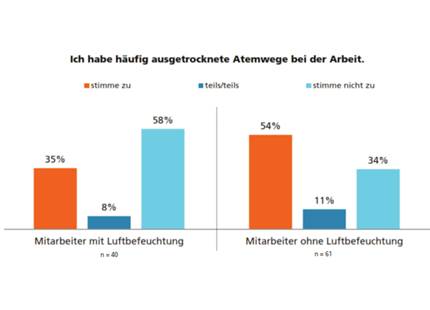 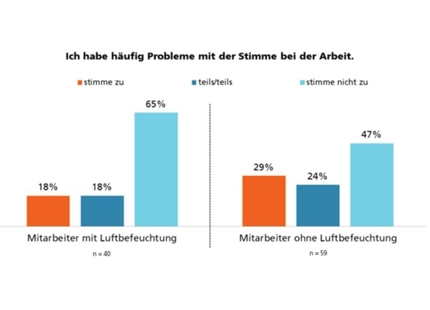 In particular, talk intensive occupational groups run the risk of problems with their voice due to sustained use. In general, we recommend a minimum air humidity level of 40 percent for professions with high talk volume.  The Fraunhofer Study confirms a clear tendency here too that voice related problems can be expected to increase in lower air humidity environments (Fig. 3): Almost one third of the workforce (29 percent) often suffers from problems with their voice in work environments without air humidification. However, when air is continuously humidified, only 18 percent report frequent voice issues.

The significance of air humidity

The results of the study confirmed for Mitja Jurecic, project manager at the Fraunhofer IAO, that air humidity has to be considered a building block for increased well-being at the workplace and to reduce health burdens: “Our studies have shown that added air humidification systems have a positive effect on the assessment of the workplace and also prove to be beneficial to the health and productivity of the office associates.

Tips and recommendations: Humidification in the office