The new name is intended to convey the company's more prominent role as a system provider for air humidification and its affiliation with the global market leader, Condair. As a specialist for direct air humidification, Draabe has been part of the Condair Group since 2001 and offers complete solutions for end users with a comprehensive range of services from planning to maintenance. The Swiss Condair group with over 650 employees and production sites in Europe, North America and China is the world's leading manufacturer of commercial and industrial humidifiers.

The new company name was introduced at the same time as the company's move to Condair's new European production and logistics centre. Situated directly at Hamburg Airport, the 8,500 m2 new building in Norderstedt will serve as a warehouse, production and administrative building for 130 employees. Operating from this location as Condair Systems, Draabe is now responsible for the distribution of direct air humidification for Germany and Central Europe. The new building also brings together the existing logistics and assembly plants of the Condair Group from Switzerland, Great Britain and Denmark. With perfect transport connections by air, land, and sea, the new European headquarters will become the central logistics hub of Condair, allowing the company to be even closer to customers, provide shorter delivery times and quicker services while also forming a solid basis for the further growth of the Condair Group.

More about the new Condair site 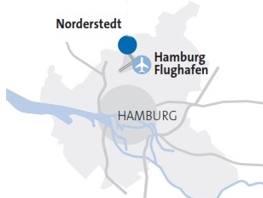 DRAABE is now based in Norderstedt right at the Hamburg Airport

Video about the construction of the new European headquarters.

Would you like more information about the DRAABE direct-room air humidification?

We will gladly provide you with further information and practical examples of your industry.